I like having two shows going at the same time on Netflix. Right now, it's Breaking Bad and 19 Kids and Counting. I've been struck by the commonalities of both shows:


I could probably go on. I love both of the shows equally, after being equally squicked out by both at first. And I love the idea of one of those worlds bleeding together in my imagination (literally).
Posted by Flannery Alden Jenny Shaw at 11:35 AM 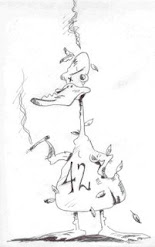 A Product of Impressive Bloggary by Evil Genius

Urban Word of the Day